Kent W9KAO reports our Machines are up and working properly.

John Zietlow K9WIC EMCOMM Chairman reports not much happening at the moment.
Construction Project (CP)
Robert W9RKK reported good increase attendance with the next meeting set for this coming Saturday. Almost all Impromptu Auction Items which were stored in the northern-most cabinet have been picked-up but some payments have not yet been completed.
The current Park District free-rental agreement needs to be renewed. Vince Kennedy has retired and the ladies at the front desk of the Tennis Club told us Richard Ward was the new Superintendent. We will need to renew our insurance rider as well.

Leo N9NBH reported two of his students studying for General passed their recent exam with Ken KD9HIJ, attending tonight, being one of the upgrade winners. Good Job Ken! Leo is considering another Technician class this coming March/April. Leo will survey the membership to line-up instructors and determine if there is sufficient public interest.

Rob N9MVO not present but previously reported the MS Walk has changed the venue for the event in 2019. More details will become known as the spring approaches.

Cliff Sowka K9QD reported Dirk Smith W0RI is planning a presentation for December on Digital Operations.
A new Program Chair will need to be selected for 2019 but the good news is nothing will be needed for January due to the Holiday Party preempting the need for a presentation that night.
Possible for February: Anthony Willard AB9YC was able to acquire speaker Valerie Hotzfeld to provide an overview of Ham Radio’s role during the recent Puerto Rico disaster response but the Board had to postpone her visit due to the scheduled Election Night in November. This delayed presentation may be considered for the February meeting if Anthony’s guest can still be available at that time.

Lyn Norstad WØLEN of Chicago Metro SATERN is presently serving as NCO for the West Metro Net.  They meet on Monday evenings at 1900 on the WCRA repeater.  They also have an East Metro Net that meets on Tuesday evenings. Their goal is to combine both Nets and request use of our K9IIK machine, probably for Monday evenings. The Board determined the time-slot they’re scheduling will not interfere with any SARC activities unless their choice for Tuesday Nets might collide with our TechNet; in such a case either of us could move our Tuesday activity up-or-back.
Frank N9QPD will inform the organization that our machine will be open for their use and our Calendar of Events will be updated on the website.

A new Committee has been formed to consider a Bylaw mechanism that allows the club to remove an undesirable member(s) will be planning to meet over the next few months.
Officers currently on Committee:
Dirk W0RI
Peter N9POL
Leo N9NBH
Club members on Committee:
John AC9JS
Ed AC9SD
John K9WIC
Kevin KB9QVX

Salvation Army’s SATERN organization requested use of our K9IIK machine for their Monday night West Metro Net. The Board of Directors approved access for their use of K9IIK machine on Monday nights and the N9RJV.ORG website calendar needs to be updated with that recurring schedule.
Submitted: December 6, 2018  Cliff Sowka K9QD Secretary.

Matt AC9IG not present but provided the following report: Don’t forget next month’s meeting is replaced with the holiday party. Same time but at Buona Beef in Hoffman Estates. Bring a ~$10 gift for the grab bag. Prizes for checking in to the net will be raffled off!

Thanks to Mike KD9KMV for filling in as net control at the last minute on Tuesday. Christmas day and New Year’s Day tech nets will be cancelled. Your last few chances to get entered in the net check in raffle are coming up on Thursdays through 1/10. Get on the air!

Also mentioned by Leo: The DuPage club is running classes for all three license levels early next year. A link can be found on our website.

Terry reported the effort to secure spare parts for our three machines is underway with the Board already approving a $400 budget. Current a new Link Controller is purchased but the Raspberry Pi should not be ordered until he can specifically identify the correct version.

Cliff Sowka K9QD:  Approval of Meeting Minutes as published on our website. So moved.

John Zietlow K9WIC reports SARC EmComm Trusted Village Radio Volunteers were treated to an appreciation dinner this week. Upcoming on June 21st there will be a National organization hosting a Wide Area Unified Command exercise by Ham Radio Operators.
At the meeting we were given a heads-up that there will be a joint exercise involving multiple communities and agencies during the week of June 17-21, 2019. This exercise will likely include amateur radio participation. It should be noted that this is the week leading up to Field Day.
On another note, I received an email from the Amateur Radio Safety Foundation, Inc. discussing the FCC NPRM Docket Number 16-239. This proposal would eliminate the 300 baud limit for digital communications and replace it with a 2.8 kHz limit instead. The focus is on allowing Pactor 4 communications in the US. This mode is already being used by MARS communications.
Apparently, a ham named Theodore Rappaport has been leading a campaign to have the FCC outlaw all digital communications requiring proprietary codec schemes. If he is successful, this would eliminate Winlink, D-STAR, DMR, Fusion, and all connected modes. This would have a major impact on emergency communications. For more information, visit https://winlink.org/FCC_Action

Meeting this coming Saturday is on schedule.

Robert Kocourek W9RKK did contact Buena Beef for the January meeting night. The January club party will include: Net Check-in Raffle, Special Acknowledgement Awards for Member of the Year as well as the Bill Smead K9IIM Memorial Construction Project contributor. These special acknowledgement awards were submitted on the Election Ballots this evening and will be ready for the January event.

Leo N9NBH reported winter General Class has concluded with two students already taking their exam. Potential for Tech Class in the spring but Leo has to notify and reserve the Library about 60 days in advance.

Matt AC9IG has been publishing club meeting minutes and activities on his newly-designed website.

Rob N9MVO reported MS Walk is moving all the way to Roselle this spring and set for the first weekend of May. July events HE Fourth and Schaumburg Triathalon Chicagoland Marathon will be handled by the EMCOMM team.

Cliff Sowka K9QD reports no presentation is planned for January due to the Holiday Party. A new Program Chair will be needed for 2019. Dirk Smith W0RI presented digital modes tonight.

No eBay sales to report

Winter Field Day: There appears to be enough interest for the SARC in the Park setting set for Jan 26th.

It has been an amazing experience serving as president of this club for the past two years. The number of activities that we schedule is impressive and shows what a great group of ham radio operators that this club is made up of. I’ve been very happy to have the support of the board and membership when we upgraded, implemented changes or tried new things out within the club. Some of these items include:

The club’s mainstay activities such as construction project, SARC in The Park and breakfast at Maxfields continue to be well attended and I thank everyone for their participation and making them so successful.

We have some new leadership taking over which I’m very excited about. Geoff Stevens KA9QGH will take over as president. He is a long-time ham and avid contester.  Danny Kafka KB9HIL will become vice president. Danny was a graduate of our ham radio class and has been active at many club activities. Ken Krzywicki KD9HIJ will take over as secretary. Ken is also a graduate of our ham radio class and has visited many board meetings and frequents our various Saturday activities. Chris Brewer AC9GN will continue as treasurer. He keeps the construction in our construction project with a lot of technical knowledge and project work.

I’d like to thank everyone who took on a role as an officer this year as well as our board members who are continuing their positions. This group of hams make sure we’re able to run our events smoothly, keep on top of the behind-the-scenes scheduling and fees and keep the club moving in the right direction. We’re all looking forward to a great 2019 under their direction.

Dirk W0RI presented an updated version of his digital mode discussion at December’s meeting. The presentation focuses on FLDIGI with Ham Radio Deluxe, but offers plenty of discussion about connecting your computer to your radio, and the general flow of digital QSO so it’s a great read even if that’s not the same setup you’re using.

Some selected slides appear below 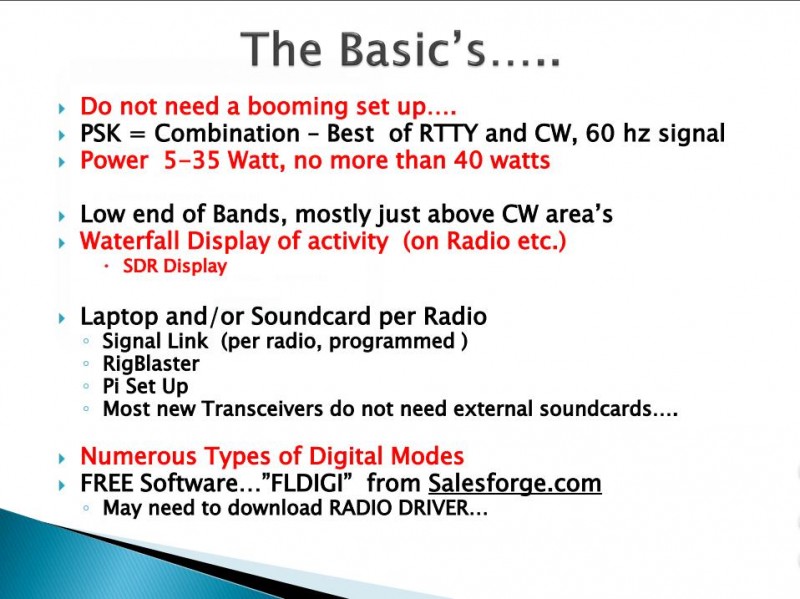 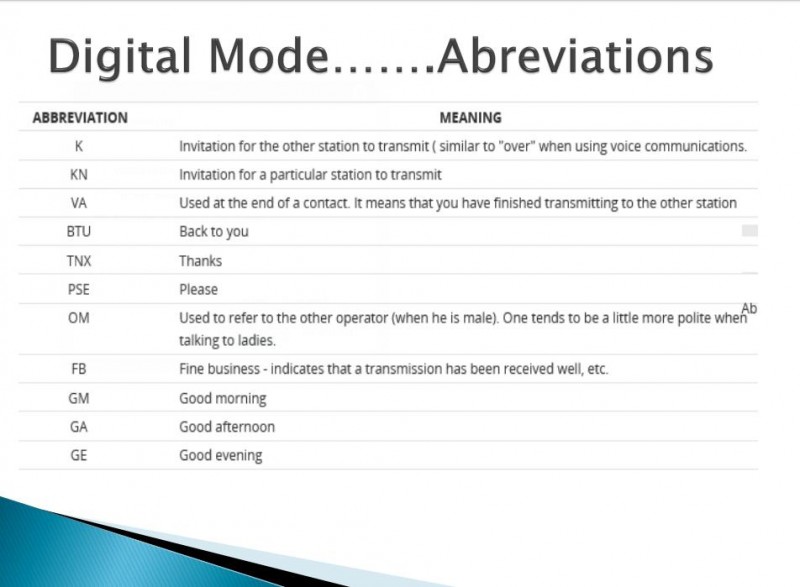 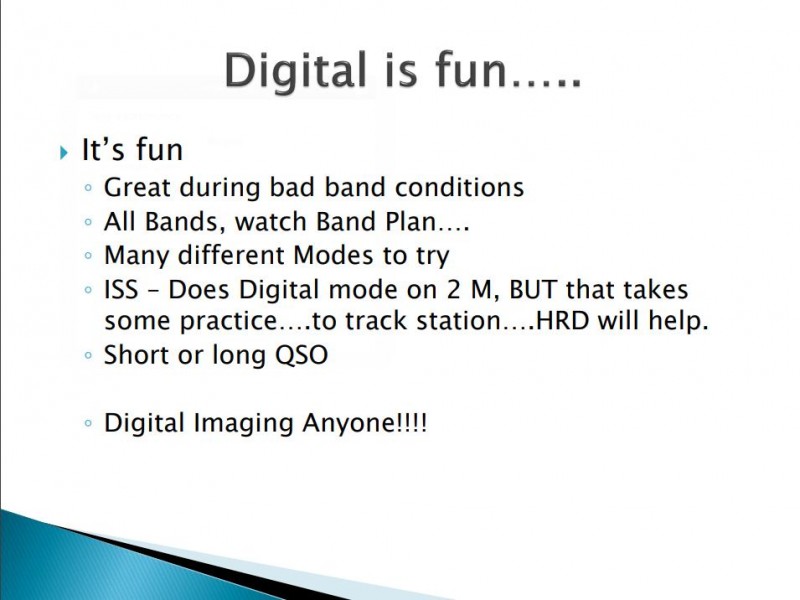