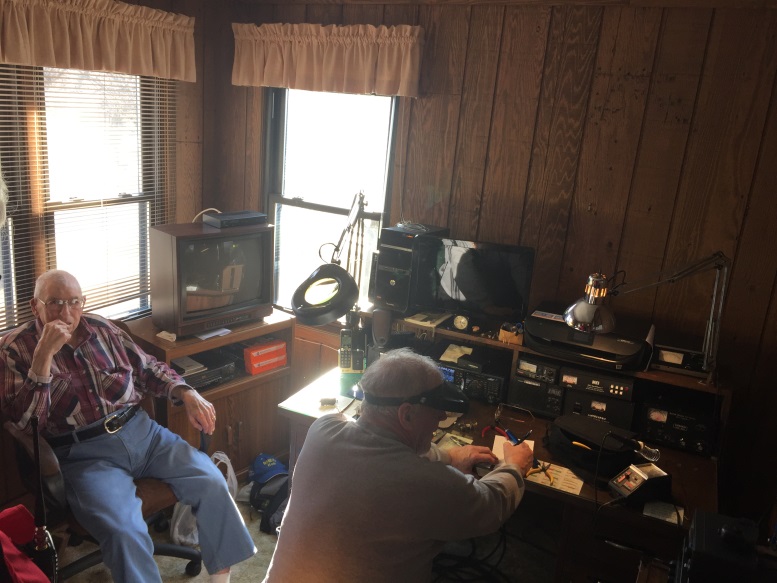 Ray was born 1927 in Chicago, IL, his Elmer was his Ham Dad. Lives with wife Millie in Roselle, IL. Ray was a charter member of SARC going back his friend Bill Sneed. An interesting fact is that the SARC repeater was on his tower for many years !!! Small world !!!
Ray contacted me end of last summer on 2M, we chatted for a while and informed me that he needed help fixing his station. He has Rotor and antenna problems, in several discover visits it was confirmed something is wrong on the tower. A few days later we cranked the tower over to take a look. Very shortly upon inspection all coax cables were bad-damaged since they have been on the tower for close to 40 years. In the meantime Ron KD9IPO (donated for temp use) helped me install an end feed wire in -20 degrees weather, to get Ray back on the air until we could solve the coax problems etc. The early volunteers were Mike Sorenson, Peter Mazuik, Rob Glowacki, and Dirk Smith. Hence from that point the project was planned and scheduled during warmer weather, which turned out to be Saturday, March 10, 2018.
The project required new coax, which Ray purchased, 250 foot spool of 8U, I had a spare rotor cable and also purchased new PL259 and SO239 connectors.

TBD: (remaining issues can all be done by simply by folding over tower)

Also, he had some rather unusual connections in his shack. The FT 1200 was connected to the ‘antenna’ connector of the SWR/Power meter, the SWR power meter’s ‘transmitter’ connector was hooked to the ‘antenna’ connector of the MFJ auto tuner, and the ‘transmitter’ connector of the MFJ was connected to the input of the amp. At least the amp was connected correctly.
The SWR/Power meter was backwards, which made ‘forward’ and ‘reflected’ power readings reversed, but worse than that, the MFJ tuner was connected backwards. That *might* have caused it to try to tune for lowest ‘forward’ reading, and most ‘reflected’ reading, as forward and reflected would be reversed with that connection.
When we first got things connected, we heard NO signal on 20 meters at all, we found that the attenuator on the radio was turned on, at -18 dB. That would kinda reduce signals by about 3 S units. You know of the Antenna 1/ Antenna 2 switch
problem. He said the 1200 rig is rather new, so he’s not real familiar with it, yet. He may need a little hand holding to help him get things set up right for usual operation.
Of course, he also needs to have the 80 Liter antenna coax connector mounted on the wall, on a plate of some sort, and yet another coax jumper cable made to connect THAT to the antenna switch.
His backup amplifier power supply, the switching supply, smells of burning resistor shortly after getting turned on. Both amplifiers work, at about the same power output level, with the same 45 Watt input. The amp he usually uses indicates on its own meter about 550 Watts, the backup amp on the shelf indicates about 300 W output with 45 W drive.
Both amps show about 300 W on the same external power meter (his meter) and about 500 Watts on my genuine Radio Shack power meter, that MUST be made for CB, because it has a 2000 Watt scale (;^D) Actually, the package for it says it has a Buene bridge, which should be accurate across the HF bands. I know the 20 and 200 Watt scales on it are pretty close. I don’t use the 2 KW scale, so I don’t know how close that reading is.
The backup amp DID work on the backup power supply before we started smelling smoke, so it apparently was putting out SOMETHING for a while. We shut it down as soon as we smelled something bad..
It was a very worthwhile effort! Now we need to figure out what’s wrong with the tribander on 20 Liters, and the rotatable dipole on 10 and 40 Liters.

Although the project is not 100% completed, Ray is back on the air with his Amplifier. Ray and Millie were very impressed with the courtesy and work ethics on this project. He could not get over the fact that so many people showed up to help him repair his issues. What I mentioned to Ray: “ You risked your life/ limbs in WW II, for many, it is now our turn to do this small thing for you ,as a token of our appreciation, as a Veteran,  fellow Amateur Radio Operator and charter member of SARC.”   In the next week or so I and Mike K9KQX RHG Editor, will feature Ray’s life profile in the RHG.

A personal message from me: Although I was not born in the USA, but did become a citizen, I was proud to have this kind of response and Crew working to help Ray. Looking back I believe we had the right number of volunteers, I actually had to turn people away prior to project start.

Thank You again on behalf of a very grateful Ray and wife Millie…..