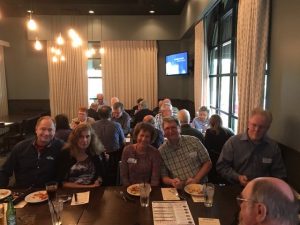 Here is a note from the Club’s Social Activities Chair, John Douglas KD9KSH, regarding the recent SARC dinner event.

“My thanks to all those who attended the Sunday SARC dinner.  The Lucky Monk provided a great location and a room suitable for all the SARC participants.  I hope everyone enjoyed the dinner and conversation provided by our club members.  Everyone seemed to go home with a smile on their faces after an evening with old and new friends.

Thanks again for making this a great evening.
John KD9KSH”

And a big thank you to John from all the club members, for making this happen.

On Friday, October 25th, there will be a State-wide radio exercise for Emergency Communications.  Hoffman Estates would like to “play” in the exercise if we can find a role for our group, including SARC.

To determine if it makes sense to pursue this further, it is necessary to get a head count of potential participants from our club members.

Please send  an email to John, K9WIC, using the link below, if you are interested and able to participate. 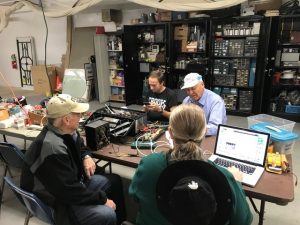 Thank you to Kevin K9MKD, for providing the photos shown below of the club’s most recent Construction Project Meetings.

As you can see from the photos, there is always something interesting going on, with a lot of very knowledgeable folk to help out.

For details about this regular club activity, please visit the Construction Project page.

“Thank you to all hams that supported this activity.  From the pictures I recognized Cliff, Leo, Chris, Burt and Dennis.

There may have been others that weren’t in the photos that I saw.  Bill Clark commented that he really appreciated the effort and that the Club did a great job.

Thank you to all. 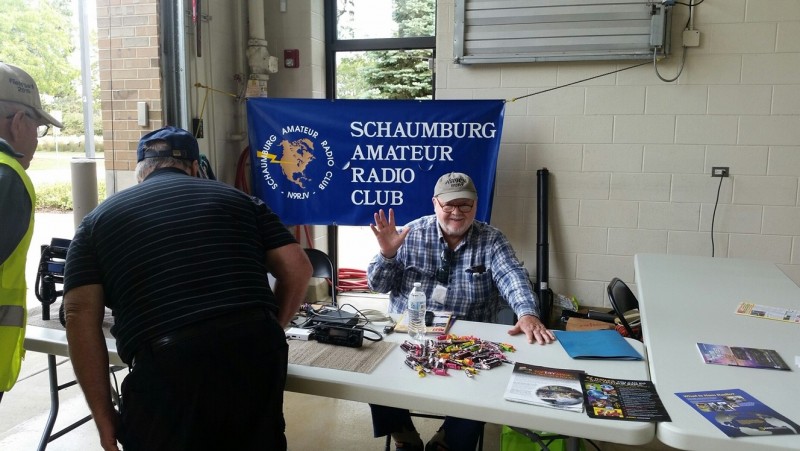 Attached below is a revised sample ballot for the upcoming Club election.
For those of you who will be needing an absentee ballot, please send me an email, and I’ll mail one to you. You must then mail it in to the SARC P.O. Box to be received prior to the election date.  The Club’s mailing address is provided below.
For those attending the meeting, ballots will be available.
73 KD9HIJ  Ken
SARC Ballot form Revised

Election night approaches!!!  This November meeting should be a wonderful election night, full of intrigue and last-minute horse-trading. Be sure to mail in your absentee ballots when they become available. If you have not run for an office or more importantly, for President, please feel free to write yourself in and tell as many people as you can. I may even vote for you.

I have been advised by a distinguished former president that I can vote a raise for myself, as President. I would like to let it be known that when you people drag me kicking and screaming me into another year as President, I will vote myself the biggest raise the club has ever seen. Just so I do not seem greedy and more corrupt than I am, I will only increase my current pay by 73%. I look forward to the next meeting. As a nominated President I step forward with reluctance, trepidation and just a hint of mischief. As President, I promise to execute my duties as poorly as I have executed them thus far. I am hoping the raise will lift my spirits enough to show up to more dinners after the meetings.

Rebecca KA9EFE brought in trays of her famous baked treats.

President Geoff Stevens called the meeting to order at 7:00 pm.

The President was in attendance and had no report.

The VP was in attendance and had no report.

The Treasurer was not in attendance. The Secretary read the Treasurer’s report from the BOD meeting held 2 October.

A motion to accept the Treasurer’s report was made by Frank N9QPD, and with a second by Robert W9RKK, the motion carried.

Rob N9MVO reported that SARC members have participated in the MS Walk, 4th of July activity, triathlon, and EMCOMM activities. Our members continue to participate in public service activities.

Rob N9MVO reports that the batteries needed for the repeater have been ordered from an Elk Grove company and when they arrive there will be more information forthcoming.

The subject of a new repeater ID was brought up. Further discussion on that will be discussed later.

Steve AC9EM reports that CP is regularly attended by about 15 to 20 members. Cliff K9QD says that the Club has 5 or 6 scopes and that we should consider keeping one and selling the rest. The last ham fest is November 7th in Wisconsin.

John KD9KSH says that the Christmas/Holiday Party is coming up on the third Thursday of January 2020. As in the past, the party will be held at Buona Beef. A SARC all message about this is forthcoming.

Steve AC9EM reports that about 20 members check in regularly to the nets.

Leo N9NBH says that there are two weeks left in the Technician Class.  The possibility of another General Class was brought up. It would have to be a ten week class due to all the information to be passed on. Perhaps this activity would occur in the fall of next year.

Dennis KD9HIK was approached during the Public Service open house about SARC doing a video for the Park District. This would be a one-time video about what SARC does for public service. They have their own videographers and would be doing the filming. More details will be forthcoming on this.

It was brought up that Bob W9GEW has purchased the materials that will be used to create the SARC ID badges. We should be hearing soon from Bob Z and BOB B N9JAX, who has the original list of members who have requested badges.

Danny KD9HIL has been appointed Field Day Chair by Geoff KA9QGH. Leo N9NBH says that he and one other person can move the large cabinet from the Schaumburg PD to the Tennis Club while renovations are ongoing at SPD.

Elections are coming up for several positions. Voting will take place at the next Club meeting. Anyone wishing to run for office, or chair a committee please contact any Board member.

Bill W9WEM reports the following attendees for CP on 28 September.

Those in attendance at CP 12 October were:

The next construction project will be held 26 October at the Schaumburg Tennis Club.

With no further business to conduct a motion to adjourn was made by Geoff KA9QGH and seconded by Ken KD9HIJ. The motion carried and the meeting was adjourned at 8:15 pm.

He spoke about the band, equipment (“some assembly required”), transverters, and parabolic reflectors, among other things. It was a  great presentation.

Chairman Leo Ribordy called the meeting to order at 7:00 pm noting that there is a quorum.

Approval of the minutes of the previous BOD meeting held 4 September 2019 and published in The RHG. A motion to approve the minutes was made by Frank N9QPD, and with a second by  Burt AB9CV, the motion carried.

In an effort to generate more interest in Club activities, it was suggested that the Club engage in a summer fox hunt (the Club has micro generators), and this will be brought up at the next Club meeting. Other items for consideration are the recurring calendar, by-law changes, publishing an officer slate for the upcoming election, and the holiday party. It was also mentioned that the Field Day Chair could have their dues waived for the year. Another idea would be to set up a booth at Harper College extolling the activities of SARC and Ham Radio. Anyone wishing to run for office should contact Leo N9NBH or Ed AC9SD. Elections will be coming up soon. Bill W9WEM has been reaffirmed as Construction Project Coordinator.

John KD9KSH reports that we had a good turnout for the Club dinner at The Lucky Monk. Good food, good atmosphere and good conversation with the attendees were enjoyed by all.

The Technician class has six students that are currently engaged in pursuing their license.

Bob N9JAX sent a report in that he had three contacts in September:

The Salvation Army has yet to pick up the tower the Club donated to them. There is a permit process they are going through now for installation.

Kent W9KAO has been reimbursed for most of the POD expense. The final dollar amount will be forthcoming soon.

With no further business to conduct a motion to adjourn was made by Ken KD9HIJand seconded by Geoff KA9QGH. The motion carried and the meeting was adjourned at 8:30 pm.